Monk Moses the Athonite has been an ascetic on the Holy Mountain for thirty-five years. He is an icon-painter, poet, critic and writer. He has published 52 books and written over 1,000 articles. His works have been translated and published in many countries around the world. He is the senior secretary of the Sacred Community of the Holy Mountain. For some twenty-five years he has been the Elder of the hermitage of St John Chrysostom and of the hermitage of the holy great-martyr Panteleimon attached to Koutloumousiou Monastery. 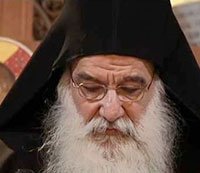 We are publishing a few extracts from an article by Fr Moses, in which he analyses the contemporary situation in Europe and Greece.

‘Greece has long been in a state of reanimation. The Greek language is being murdered every day. All around reigns the darkness of disintegration and a gloomy and violent national nihilism.

The desire to make money quickly and easily has led many into making tragic mistakes. Impatience and lack of seriousness are costing us dear. The thirst for riches has taken Europeans to extremes. Contemporary Europe is totally deChristianised.

The Vatican is reaping the fruits of deforming Christian teachings. The most horrific cases of child rape are taking place. Western people are running from ‘God is dead’ to Eastern gurus, desperately hoping to find at least some semblance of spiritual life. Some 2,000 branches of Protestantism are competing for a flock. The deChristianisation of Europe is on a very large scale and will lead to even more catastrophic consequences.

Europe has forgotten Christ and is embracing Islam. It seems as if it wants to commit suicide. Mosques are rising up in place of churches.

We are not against other religions, but we do want to defend Orthodoxy. Or do they now want to take away from us even this last right?

We look to the resistance of people who cannot be bought off. There are quite a few of them. It is time to stop being quiet. Our country needs spiritual regeneration.’