A Talk Given at St Nicholas Russian Orthodox Church in Oxford on 23 March 2013 after the Memorial Service at Archimandrite Nicholas’ Grave in Headington Cemetery.

Charles Sydney Gibbes, for short Sydney Gibbes, was born 137 years ago, on 19 January 1876. In the 19th century this was the feast day of St John the Baptist, the voice that cried in the wilderness. His parents were called John and Mary – more English than that you cannot find. His father was a bank manager in Rotherham, just outside Sheffield, in Yorkshire. Amusingly, this would later be recorded by a Russian civil servant on Sydney’s residence papers in Russia as ‘Rotterdam’.

With no fewer than ten siblings, Sydney grew up into a stereotypical, Victorian, Protestant young man of the educated classes. He received this education at Cambridge, where he changed the spelling of his surname to Gibbes, from Gibbs, as the adopted form is the older, historical one. This change was typical of his love of detail and historical accuracy. Sydney is described as: severe, stiff, self-restrained, imperturbable, quiet, gentlemanly, cultured, pleasant, practical, brave, loyal, honourable, reliable, impeccably clean, with high character, of good sense and with agreeable manners. e 2wasHe seems the perfect Victorian gentleman – not a man with a vision.

However, as we know from history, underneath Victorian gentlemen lurked other sides – repressed, but still present. For example, we know that he could be stubborn, that he used corporal punishment freely, that he could be very awkward with others, almost autistic, as we might say today, and he is recorded as having quite a temper, though these traits mellowed greatly with the years. Dmitri Kornhardt recalled how in later life tears would stream down Fr Nicholas’ face when conducting services in memory of the Imperial Martyrs, but how also he would very rapidly recover himself after such unEnglish betrayals of emotion.

Underneath the Victorian reserve there was indeed a hidden man, one with spiritual sensitivity, who was not indifferent to ladies and interested in theatre and theatricals, spiritualism, fortune-telling and palmistry, and one who was much prone to recording his dreams. Perhaps this is why, when after University he had been thinking of the Anglican priesthood as a career, he had found it ‘stuffy’ and abandoned that path. Talking to those who knew him and reading his biographies, and there are three of them, we cannot help feeling that as a young man Sydney was searching for something – but he knew not what. The real man would out from beneath his Victorian conditioning.

Perhaps this is why in 1901, aged 25, he found himself teaching English in Russia – a country with which he had no connection. Here he was to spend over 17 years. The key moment came in autumn 1908 when he went to the Imperial Palace in Tsarskoe Selo and became the English tutor of the Imperial children. In particular, he became close to the Tsarevich Alexis, with whom he identified very closely. Why? We can only speculate that there was a sympathy or else complementarity of characters; together with Sydney’s bachelordom, this may have been enough for the friendship to develop. In any case, he became almost a member of the Imperial Family and their profound and lifelong admirer of their exemplary Christian Faith and kindness.

In August 1917 Sydney found himself following the Family to Tobolsk. Utterly loyal to the Family, in July 1918 he found himself in Ekaterinburg, after the unimaginable crime in the Ipatiev House had taken place. He helped identify objects, returning again and again to the House, picking up mementoes, which he was to cling on to until the end, and still reluctant to believe that the crime had taken place. Coming almost half way through his life when he was aged 42, this was without doubt the crucial event in that life, the turning point, the spark that made him seek out his destiny in all seriousness. With the murder of the Family, the bottom had fallen out of his life, his raison d’etre had gone. Where could he go from here?

He did not, like most, return to England. We know that he, like Tsar Nicholas, had been particularly shocked by what he saw as the British betrayal of the Imperial Family. Indeed, we know that it was the scheming Buchanan, the British ambassador to St Petersburg, who had been behind the February 1917 Revolution and deposition of the Tsar. This had been much greeted by the treacherous Lloyd George as the ‘achievement of one of our war aims’. (We now also know that it had been British spies who had assassinated Rasputin and also that the Tsar’s own cousin, George V, had refused to help the Tsar and His Family escape).

In fact, disaffected by Britain’s politics, from Ekaterinburg Sydney went east – to Siberian Omsk and then further east, to Beijing and then Harbin. Off and on he would spend another 17 years here, in Russian China, Manchuria. In about 1922 he suffered a serious illness. His religiosity seems to have grown further and after this he would go to study for the Anglican priesthood at St Stephen’s House in Oxford. However, for someone with the world-changing experience he had had, that was not his way; perhaps he still found Anglicanism ‘stuffy’. Finally, in 1934, in Harbin, he joined the Russian Orthodox Church.

There is no doubt that he did this as a direct result of the example of the Imperial Family, for he took the Orthodox name of Alexis – the name of the Tsarevich. He was to describe this act as like ‘getting home after a long journey’, words which perhaps describe the reception into the Orthodox Church of any Western person. Thus, from England, to Russia and then to China, he had found his way. In December 1934, aged almost 59, he became successively monk, deacon and priest. He was now to be known as Fr Nicholas – a name deliberately taken in honour of Tsar Nicholas. In 1935 he was made Abbot by Metr Antony of Kiev, the head of the Church Outside Russia and later he received the title of Archimandrite.

Wishing to establish some ‘Anglo-Orthodox organisation’, in 1937 Fr Nicholas Gibbes came back to live in England permanently. He was aged 61. Of this move he wrote: ‘It is my earnest hope that the Anglican Church should put itself right with the Holy Orthodox Church’. He went to live in London in the hope of setting up an English-language parish. In this he did not succeed and in 1940 he moved to Oxford. In this last part of his life in Oxford, as some here remember, he became the founder of the first local Russian Orthodox chapel at 4, Marston Street, where he lived in humble and modest circumstances. In recalling the address of that first chapel dedicated to St Nicholas, we cannot help recalling that today’s St Nicholas church, where we speak, is off Marston Road, and not so very far away from Marston Street.

Not an organiser, sometimes rather erratic, even eccentric, Fr Nicholas was not perhaps an ideal parish priest, but he was sincere and well-respected. In Oxford he cherished the mementoes of the Imperial Family to the end. Before he departed this life, on 24 March 1963, an icon given to him by the Imperial Family, was miraculously renewed and began to shine. One who knew him at the time confirmed this and after Fr Nicholas’ death, commented that now at last Fr Nicholas was seeing the Imperial Family again – for he had been waiting for this moment for 45 years. He was going to meet once more those who had shaped his destiny in this world.

In the 1980s I met in an old people’s home in Paris Count Komstadius. He had met Fr Nicholas in 1954, but perhaps had seen him before, since his father had been in charge of the Tsarskoe Selo estate and he himself had been a childhood friend of the Tsarevich. I remember in the 1980s visiting him. In the corner of his room in front of an icon of the martyred Tsarevich there burned an icon-lamp. He turned to me and said: ‘That is such a good icon, it is just like him and yet also it is an icon’. Not many of us lives to see a childhood playfriend become a saint and have his icon painted. Yet as a young man in his thirties Fr Nicholas had known a whole family, whom he considered to be saints. Indeed, he had been converted by their example.

There are those who have life-changing experiences. They are fortunate, because they stop living superficially, stop drifting through life and stop wasting God-sent opportunities. Such life-changing experiences can become a blessing if we allow them to become so. Fr Nicholas was one such person, only his life-changing experience was also one that had changed the history of the whole world. For a provincial Victorian Yorkshire bank manager’s son, who had grown up with his parents John and Mary, he had come very far. And yet surely the seeds had been there from the beginning. To be converted we first of all need spiritual sensitivity, a seeking spirit, but secondly we also need an example. Fr Nicholas had had both, the example being the Imperial Martyrs. As the late Princess Koutaissova, whom many of us knew, said of his priesthood: ‘He was following his faithfulness to the Imperial Family’.

In this brief talk I have not mentioned many aspects of Fr Nicholas’ life, such as his possible engagement, his adopted son, his hopes in Oxford. This is because they do not interest me much here. I have tried to focus on the essentials, on the spiritual meaning of his life. Those essentials are, I believe, to be found in his haunted and haunting gaze. Looking at his so expressive face, we see a man staring into the distance, focusing on some vision, both of the past and of the future. This vision was surely of the past life he had shared with the martyred Imperial Family and also of the future – his long hoped-for meeting with them once more, his ‘sense of completion’. 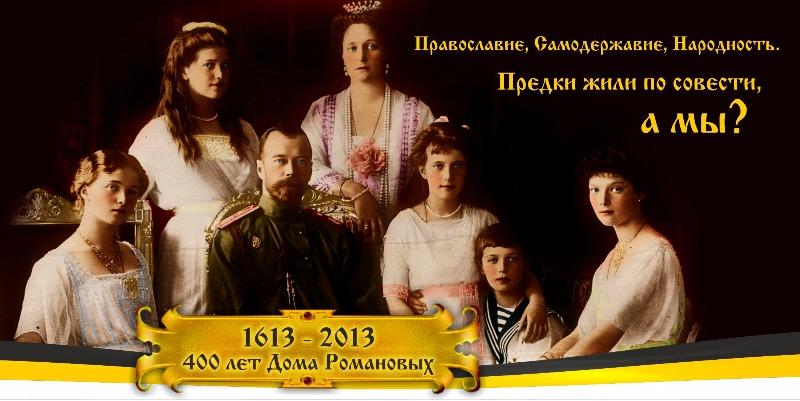 The above poster has appeared on billboards in the Ukraine in recent days. It says: Orthodoxy. Sovereignty. The People. Our ancestors lived according to their conscience. What about us? 1613-2013. 400 years of the House of Romanov. According to opinion polls of recent years between 25% and 35% of Russians would like to see the return of the monarchy. However, no-one knows of a suitable candidate.