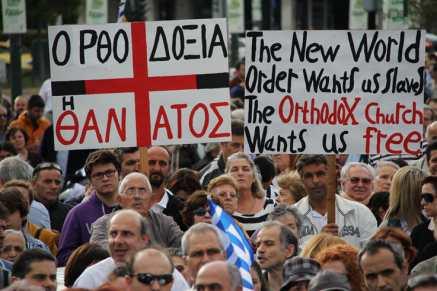 Firstly, there was the death of Herod. He who through lust had instituted physical and economic slavery was eaten by worms from inside.

Secondly, there was the suicide of Pilate. He who through cowardice had instituted intellectual and political slavery did away with himself.

Thirdly, there was the suicide of Judas. He who through greed had instituted spiritual and religious slavery, who had replaced the worship of life and the living by the worship of death and the dead, hanged himself and his guts spilled out in his fall.

These three deaths are also the deaths that are necessary if all Christian nation states and legitimate hierarchies are to be liquidated in order to enthrone Antichrist:

Firstly, monarchies had to be destroyed by physical revolutions so that Herod can take control: the English Protestant in 1688; the French Catholic in 1789; the Russian Orthodox in 1917.

Secondly, national sovereignty has had to be destroyed by intellectual revolutions so that Pilate can take control; this means transnational organisations: UN; NATO; IMF; WTO; EU; NAFTA etc

Thirdly, a unipolar Global Empire must be constructed by religious revolutions so that Judas can take control; this means what we are seeing at this very moment, with his capital planned in Jerusalem.

This globalisation, the new feudalisation, the movement towards a unipolar world against a multipolar world, the syncretistic, unionistic movement to prepare the enthronement of Antichrist in Jerusalem, can only be resisted by a united Orthodox Christian Empire. It is time to see visible Orthodox Unity under the Third Rome and Second Jerusalem. Local Churches, fallen into decadent practices, have to remove themselves from their political and spiritual manipulation, from nationalism, protestantisation, vaticantwo-isation, secularisation and modernisation, by spiritual renewal and so movement towards spiritual purity.

With the mighty Russian Orthodox Church, paralysed by its Babylonian captivity and Golgotha, and so absent from the world scene for three generations between 1917 and the 1980s, the manipulated modernist and pro-secular forces on the fringes of and even in the midst of the Local Churches fell into this decadence. Since the canonisation of the New Martyrs and Confessors, these forces have largely been defeated by the resurrection of the Russian Church, so long awaited and so long prayed for by lonely White Orthodox exiles outside Russia and, in spiritual unity with them, by the people, monastics and faithful clergy of the Church inside Russia.

All is beginning to change as a result and now, whether in the first-fallen Phanar or in Alexandria, Bucharest, Antioch, Athens, Nicosia, Prague, Sofia, Warsaw, and also in sorely tempted Belgrade, Jerusalem, Tbilisi and Tirana, even some repentant secularists are beginning to realise that the choice is clear. It is either the pagan First Rome, the false globalist US/EU path they have already taken or are being bribed into taking, or else the multinational but united Orthodox path of resistance set by the Christian Third Rome, the Second Jerusalem. The resurrection of the Orthodox Empire and Monarchy is now the only path that can and does lead to freedom from global slavery, the only path that can and does lead from death to life, from Judas to Christ.